John* was spending his usual Sunday afternoon grocery shopping for the week ahead. He grabbed his needed items and headed towards the checkout line. While in line, the individual at the register was having trouble with their payment, causing the person behind John to become impatient and uneasy. The tension began to rise at an increasing rate in this small confined space, triggering a level of anxiety that far exceeded anything the majority of people typically face; John felt as if the world was caving in on him. The anxiety-filled situation overcame John to a breaking point, causing him to leap over the counter and run out of the store. It was only shortly after, John had found himself in handcuffs with an accusation of stealing, but there was a larger, looming concern.

John has a condition that is invisible to everyone else – Post Traumatic Stress Disorder (PTSD). He suffered a Traumatic Brain Injury (TBI) during a massive explosion while serving overseas in the military. This catastrophic event left John with lasting injuries and changed the course of his life. From that day on, even the most minimal tasks became daunting. The grocery store occurrence was not the first, but the most significant since returning from deployment. Although John was released by authorities once the situation had been cleared up, it was not the end of his struggles with PTSD.

Not being able to complete simple, daily tasks snowballed into barely leaving the house due to fear of an anxiety attack occurring at any given moment. John knew that something had to be done and took a leap of faith by requesting a referral from his mental health treatment professional at the local Vet Center. The referral was for an organization that assisted veterans with mental illnesses by pairing them with and training service dogs. 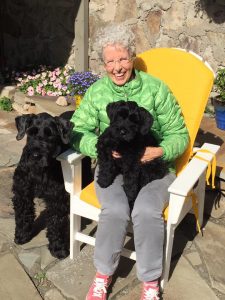 Stand With Me provides an Assistance-Dog Team Training Program for our American Veterans who have so proudly served our country. This amazing organization follows in the footsteps of other well established and successful programs designed for veterans in our community with service-related mental health disabilities. Stand With Me was founded in 2016 by Francess “Myrph” McMahon, who has over 40 years of professional dog training experience and over 10 years of experience as a direct service provider, working with people who struggle with mental health disabilities. These two professional backgrounds uniquely qualify Francess to navigate the process of working with veterans who have a military service-related mental health disability to train their own service dogs.

John’s process was like many others who had gone through the program before him and dealt with similar service-related mental health challenges. As the first step, Stand With Me assisted in obtaining a suitable canine candidate for John, which ensured that the dog and himself will be able to successfully pass through the program. He was paired with a beautiful Labrador Retriever named Fido* and couldn’t be more excited to begin the training. For the next year, Stand With Me taught, coached, and supported John and Fido during the process of training so together, they could become an outstanding team. Service dogs are trained specifically for the needs of the veteran and Fido does an amazing job of this. Beyond the emotional support that Fido provides for John, the dog is now trained to sense when John’s anxiety is starting to build before John himself even realizes it.  At this point, Fido has been trained to lean on John or sit on his feet, providing a tactile grounding effect for John, which will often prevent the building anxiety from becoming a full-blown panic attack.  If a full-blown panic attack does not get successfully averted, and an episode like John’s grocery store event begins to happen again, all John has to do is give a command to Fido, and Fido will guide him to the nearest exit. Training has provided Fido the skills to know where the exit is at all times in case of a situation like this. The ability to complete daily tasks while knowing he has support right by his side has given John his life back.

The year-long team training program is designed to be a positive, therapeutic experience for veterans navigating the process of effectively managing their mental health symptoms. This style of service dog acquisition helps veterans to become more skilled and confident service dog handlers in our communities, resulting in veterans who take great pride in their accomplishments as service dog teams. 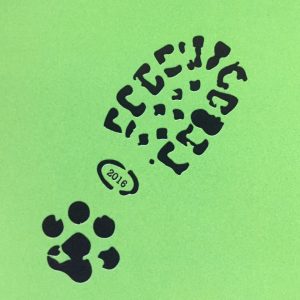 Completing the training program in a record time of 10 months, Fido was registered as an official service dog after passing the nationally recognized standard testing. This was an extraordinary feat that could only be accomplished by hard work and dedication, bringing both pride and self-fulfillment to John and Fido. They have come a long way, yet their journey does not stop here; both keep-up with their post-graduation training for annual recertification testing. This is a vital component to the success of the dog team and greatly decreases the chance of skill regression.

John and Fido have now signed up for the Stand With Me mentorship program and will be the very first mentors for this program. They will be partnering with one of the newer veterans recently joining the Stand With Me program to help guide them down a successful path. Helping others through the process that changed his life, is also a very therapeutic activity for John.

John and Fido’s inspirational story is only one of many that come through the doors of Stand With Me. This entire organization works tirelessly to give immediate and direct assistance to those who have sacrificed their lives to keep our country and community safe. Stand With Me does a great deal more than just train dogs, they help veterans to get their lives back.

*Names have been changed to protect the identity of individuals in this story.